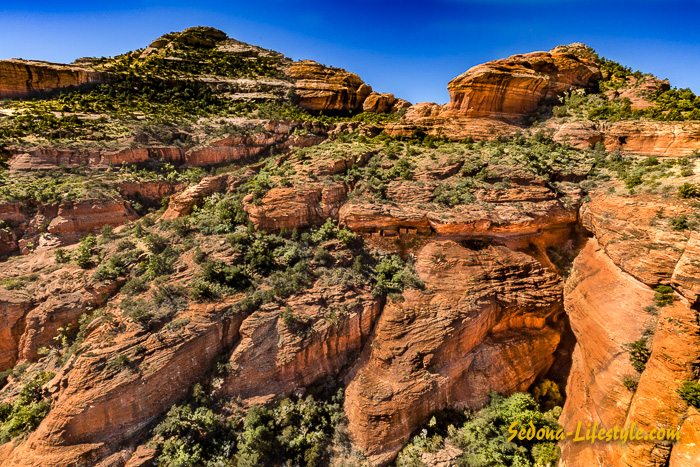 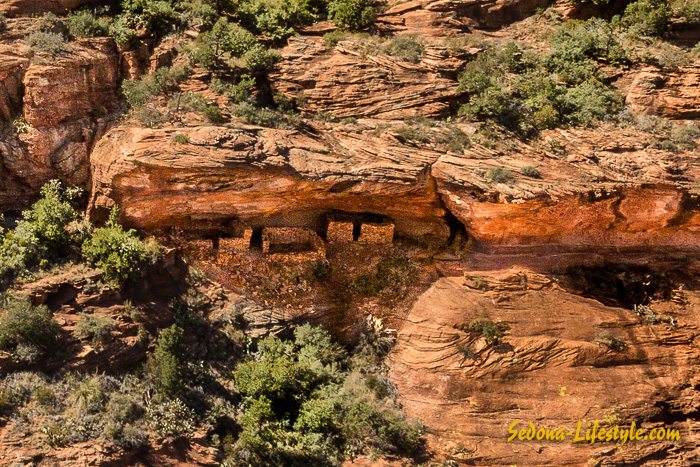 As you can see by the first picture, these Cliff Dwellings would be easy to miss. Very few people other than aerial tours have seen these ruins. The aerial view above has been enlarged to see the entire ruins.

The history of the Native Americans who left their mark on Sedona and the Verde Valley, goes deep into pre-history and most of the historical accounting leaves a lot to conjecture.

The Anasazi and Sinagua people were nomadic and inhabited the entire region. We know that because there is evidence all around us. Unfortunately, the nomadic nature of the tribes generates much doubt as to what has happened. However, they went from living in pit houses clustered together in basic agricultural communities to sophisticated cliff dwelling structures with elaborate agricultural systems.

The tribes of Arizona include: Hopi, Navajo, Yavapai and Apache. All of these tribes have intermingled in our Sedona area. It should be noted that natural areas such as the Grand Canyon cut off areas of migration of the tribes north and south.

The interpretation of the word

“Yavapai” is people of the sun. They were considered the first people of Sedona. Their history is also not well documented before the 1800s.

But if you hike a lot, you will find evidence all around that points to the history of the area. Arrowheads, bits of broken pottery and stones used to sharpen rudimentary tools can be found in washes. Besides my experience, I have hiked with my son, who is an avid hiker. He has found untouched areas of ruins, many in fact. He leaves these sites as he finds them out of respect for past civilizations.  In the picture above, I am in the middle of the pic and my son is checking to see if he found an artifact.

Rick and I have been “up close and personal” with at least seven Heritage Sites possibly more, in Northern AZ. Four of those are in the Sedona area.

Notice The Striations Above

In the future I will take some pics that show “energy” lines. Thought by some to point directly to areas of high energy intake. The weird or interesting point is that the line angle changes as you adjust your location on the rock and continue to point to the same formation even if you move hundreds of feet away… I will key in on the rock formation “Cockscomb”. That is for another time!