Enter Stage Left… Monsoon 2019 Is Here! What Will Sedona Arizona See This Summer? 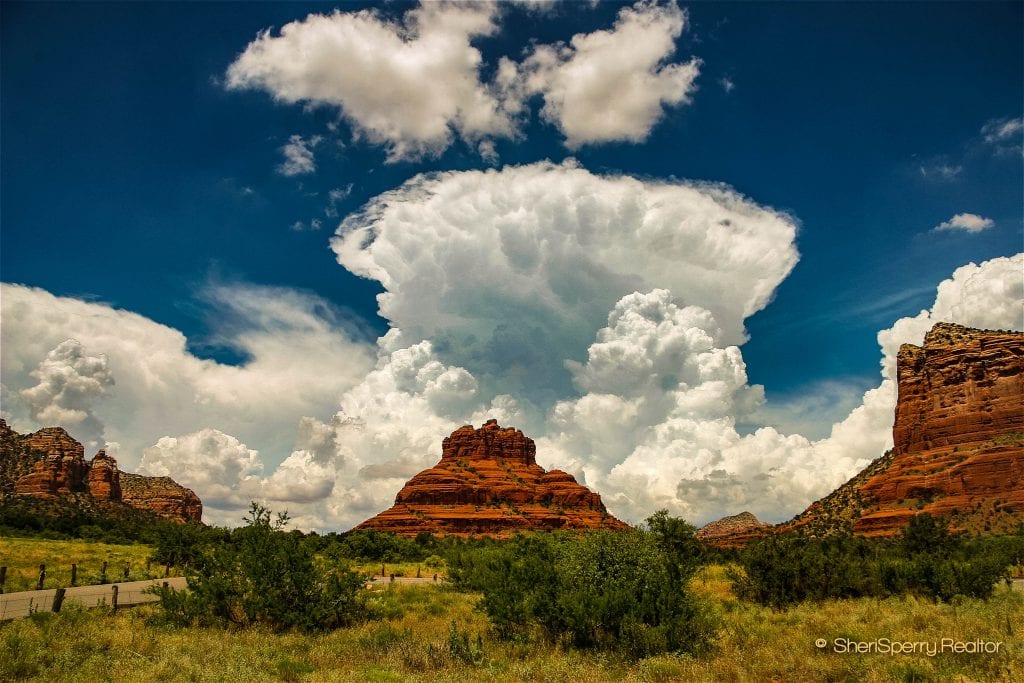 Quick Note: Every year I update this post with current information, for the most part, the science does not change, but climatic conditions vary from year to year. Sedona weather readings are gathered from the Cottages at Coffeepot weather station located in Soldiers Pass, Sedona Arizona.

Monsoon 2019 is a season – Sedona, AZ – First of all, there is no need to add season at the end of Monsoon because Monsoon is a season. Monsoon affects the west and southwest states because the pattern of the weather changes as noted below.

Areas of the United States Most Affected by Monsoon

Here are just some of the areas that are most affected by monsoon. Areas such as the southern California high desert, southern Nevada including Las Vegas, all of Arizona, New Mexico, western Texas, southern Utah, and Colorado.

How Long Is The Monsoon In Arizona?

Monsoon officially starts on June 15th and ends on September 30th. However most of the rain comes from the middle of July through the middle of August.  This is one of the reasons that the temperature in Sedona is less harsh during July and August.  The average rainfall in the state of Arizona is around 12.5 inches.  The Sedona area gets more than the average rainfall. We have had as much as 26 inches (2016) and as low as 13.66 inches (2014).

Typically, monsoon becomes active around the first week of July in Northern AZ and mid-July in Central and Southern AZ. But we have had storms earlier over the years.

Select this link to see the actual precipitation chart or go to Sedona-Weather.com for detailed weather information.

Historically, June Rainfall is Lowest of the Year

Throughout Arizona, June, without fail, has less rain than any other month with very few exceptions. The Cottages At Coffeepot weather station in Soldiers Pass Sedona has experienced only 1.36 inches of rain total in 10 years!  So far this year, we have .04 inches of rain.  For those who don’t want to deal with rain. This is the best month of the year to visit. But it usually is the hottest overall month because there is very little rain or cloud cover.

Weather enthusiasts and forecasters look to the dew point to tell if monsoon conditions exist. The dew point must be about 55º for thunderheads to start development. The dew point indicates how much moisture is in the air. At this point, the air cannot hold water in gas form and the gas will then turn to liquid form creating water droplets. The water droplets create fog or precipitation. Prior to officially declaring a calendar season for monsoon, the season would be declared when there were three days at a dew point of 55º.

It seems that Southern Arizona, the White Mountains and the Phoenix metropolitan area known as “The Valley” get the brunt of the monsoon affects. It is amazing to see the haboob (desert wind storms) 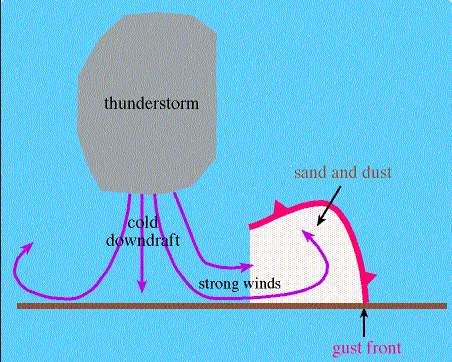 kick up and tower thousands of feet in the air moving through the valley. Those storms are the pre-cursor to the rain and massive storm cells that develop from the moisture in the warm air coming off the Gulf of Mexico. Generally, massive amounts of rain falling create downdrafts that push the air out from the center of the storm which produces a dry wind that kicks up the dust and dirt. 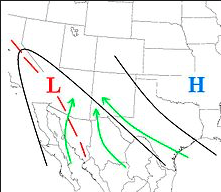 During summer, weather patterns change.  Storms that travel from the Arctic (Alaska) down through Canada and the lower 48, create our winter storm pattern.

In the summer, the pattern shifts to the south. Hurricanes, storms and moisture travel northwest from the Gulf of Mexico through Mexico, Texas, New Mexico and Arizona moving all the way to California. We also get moisture coming from the Gulf of California traveling directly north. Lots of moisture and an occasional hurricane come up from the coast of Baja California and push northeast into Arizona.

2016 and now in 2019, we are experiencing “El Niño” periodic variation.  The link to Southern Oscillation above explains the weather variation of La Niña and El Niño much more precise than I can. I only bring this up because there may be some effect on monsoon.

Suffice it to say, that El Niño creates more precipitation than normal “neutral” conditions of any other year. There is a temperature change in the eastern Pacific Ocean tropic and sub-tropic areas.  El Niño is warming and La Niña is cooling.

The first 5 months in 2019 had 10.80 inches of rainfall AND 26.12 inches of snow. Most of that snow came in February along with 3.27 inches of rain!  Since 2010, our backyard weather station has recorded an average of 5.8 inches of rain in July and August combined. Looking forward to monsoon, we want the rain and the temperature drop. The cloud formations are also amazing to see.

Monsoon Can Be A Destructive Force – Make Preparations

One quick note – Because it is our rainy season and there is a chance of lightning, and extremely high wind conditions during a thunderstorm or microburst, preparation is very important.  Take some time to have things ready to go:

How Monsoon Affects Arizona by Region

Up in Northern Arizona, we get a lot of cloud cover and the storms move through but usually don’t drop a lot of rain here in Sedona.Though in Flagstaff it is quite a different story! The area of Sedona seems to be protected. By that I mean that most of the rain falls elsewhere before it gets to our little city. But when we do get rain and storm cells, it is a big deal around here.

Flash flooding can happen because many of the streets are sloped leading up to the red rocks. There has been much improvement made in our drainage system to be able to handle the additional water flow but during an intense storm there is no place for the water to go and mud and rocks can travel across roads to find the path of least resistance. Do not travel through a road where water is more than 4 inches deep.  A car can be swept away easily.

In Southern and Central Arizona – 2014 will be remembered as the “Monsoon of the Century”. All future monsoon activity will be measured in terms of 2014. There were 3 major hurricanes that effected the weather in the southern half of the state. This caused a deluge and many towns and neighborhoods suffered tremendous flooding damage due to flash floods, hurricane wind, broken canals, and water that had nowhere to go. Many long-time residents had never seen a deluge like we had that year. Sky Harbor Airport had record rainfall of 1.59 inches and has exceeded the all-time record set back in 1903.

Some of the most incredible pictures are taken during Monsoon 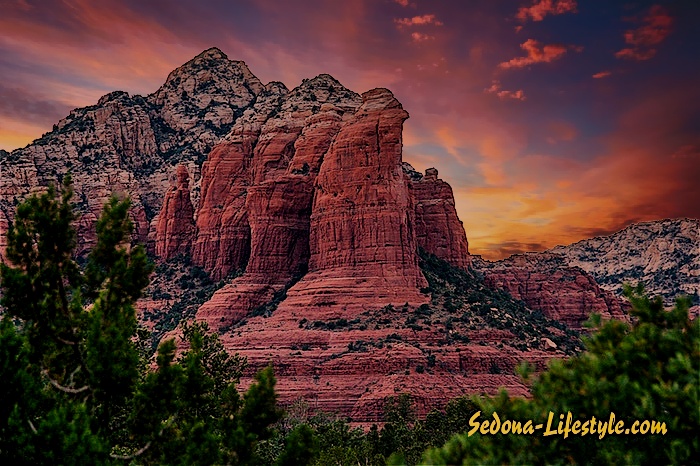 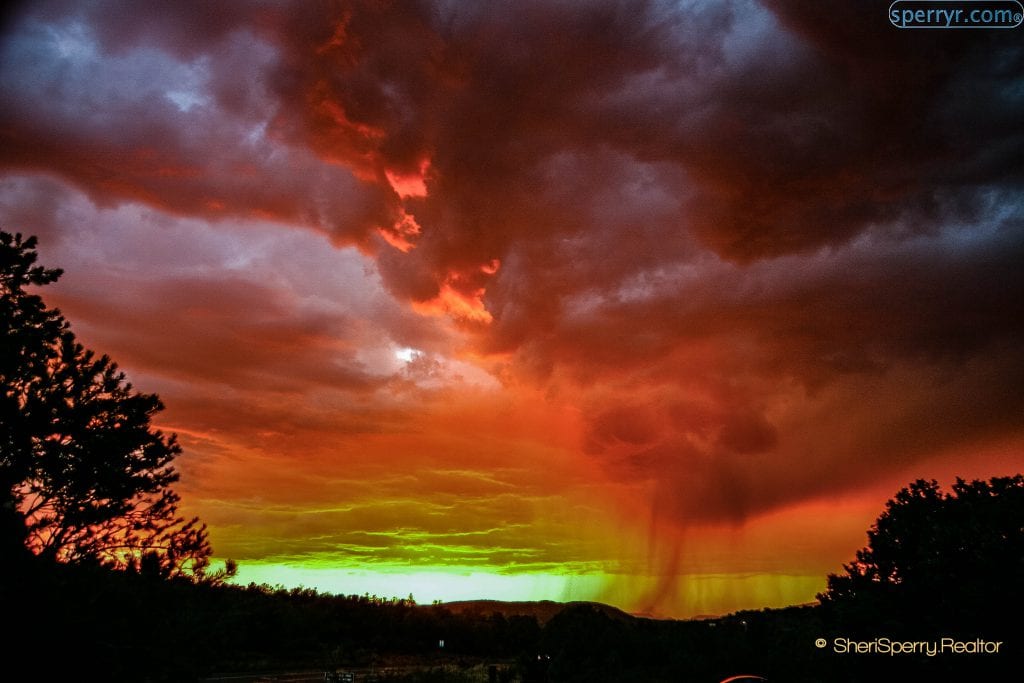 Massive Thunderstorm at Sunset creates Fire In the Sky 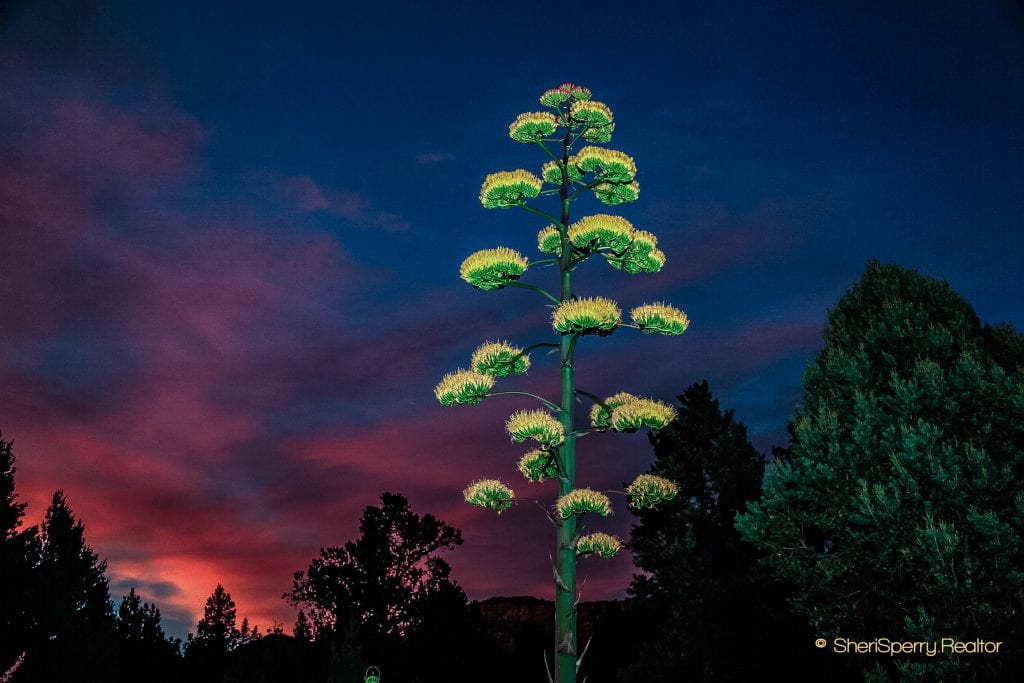 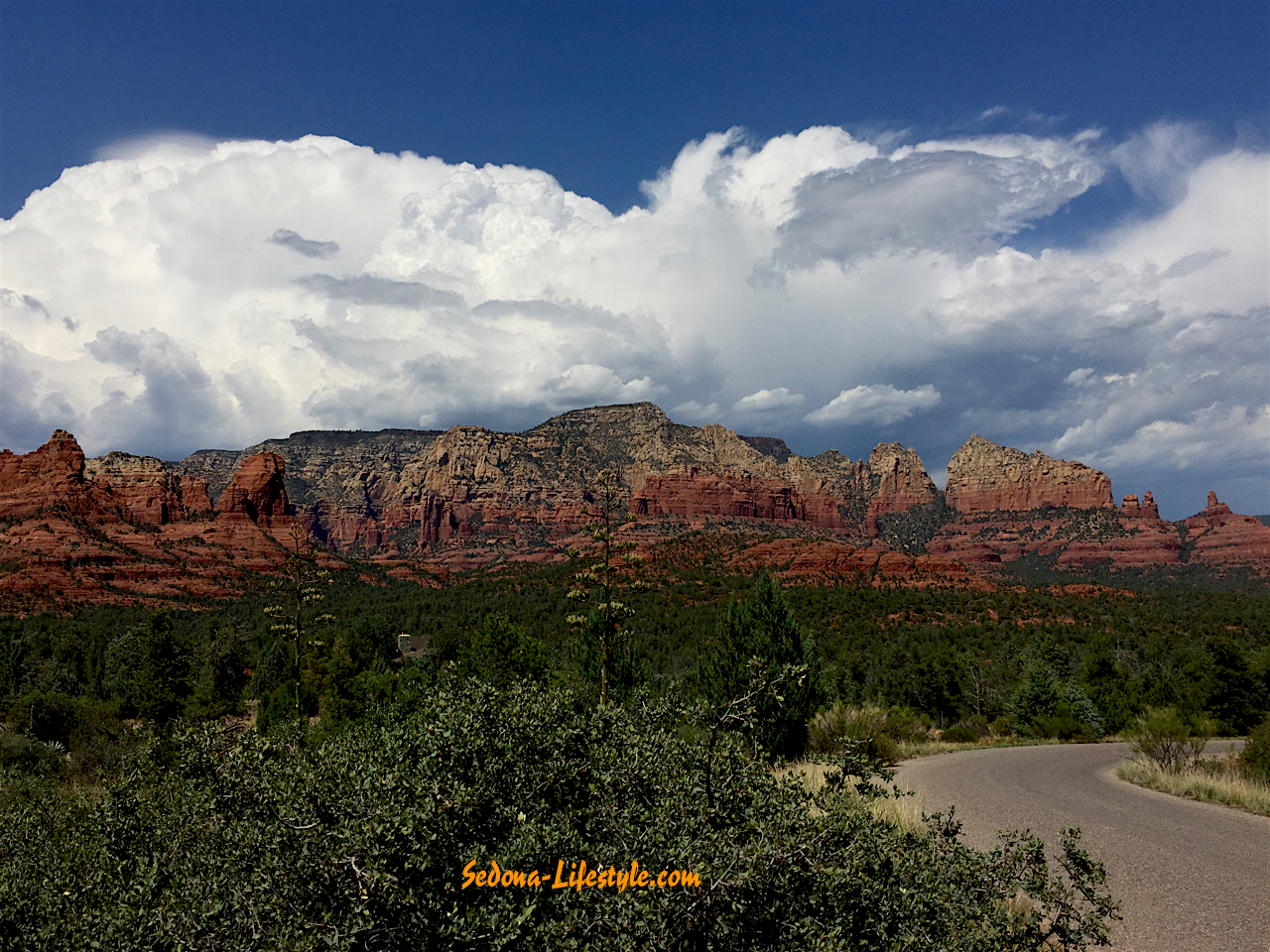 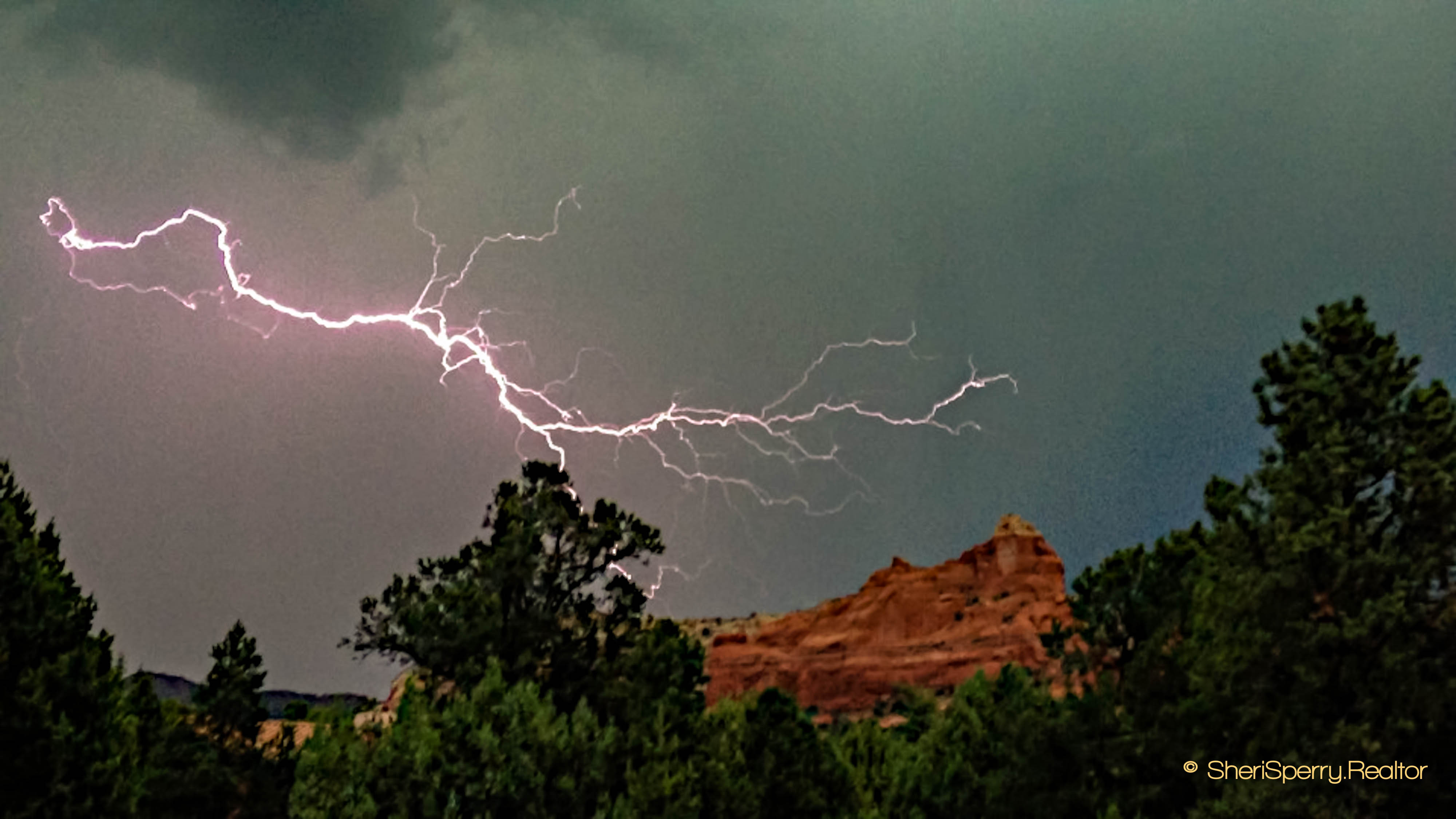 Above – Lighting Captured Above Sphinx Soldiers Pass – Photo from Backyard 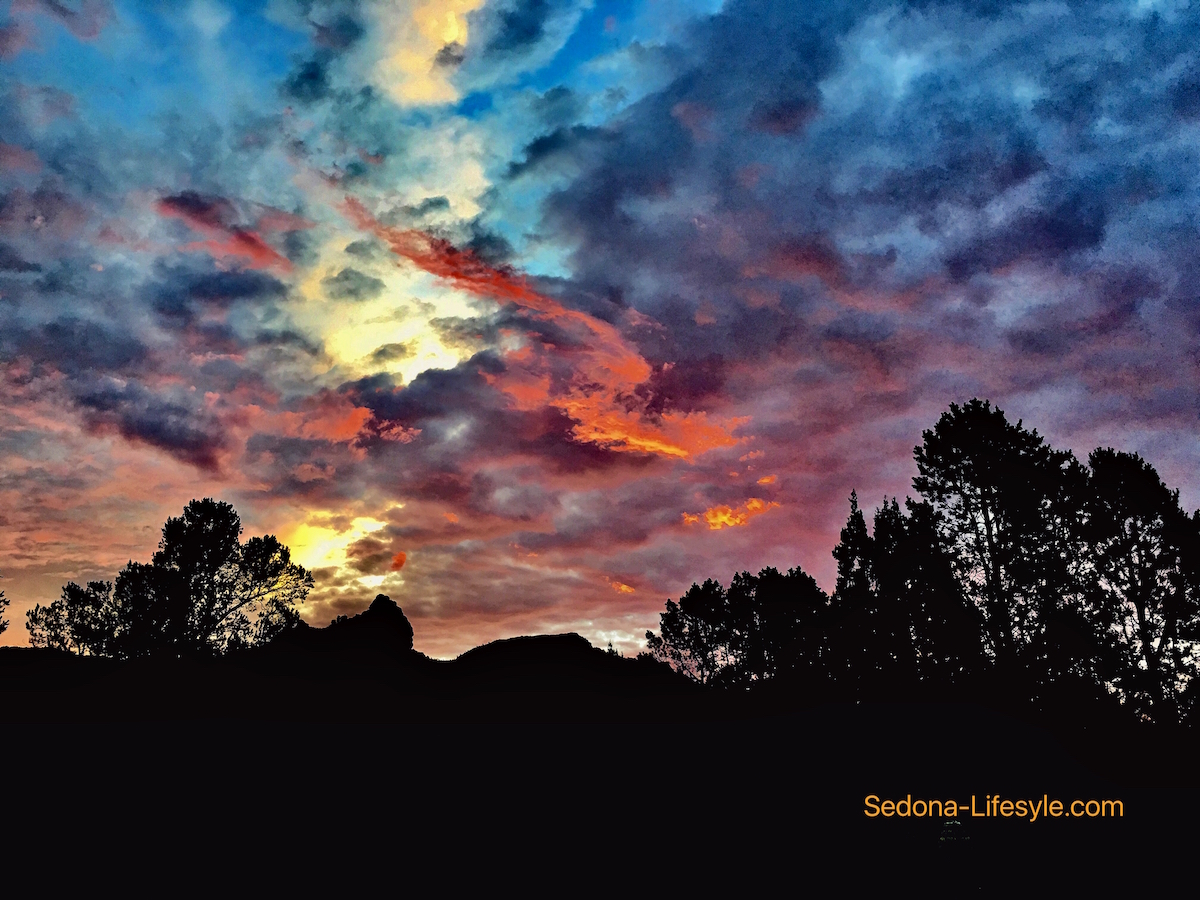 Click Here For A Video Of The Rainbow Above

It was taken just a couple of minutes before the sky went on fire!

Want to find out how much value is in your home?

I’ll walk you through it all. 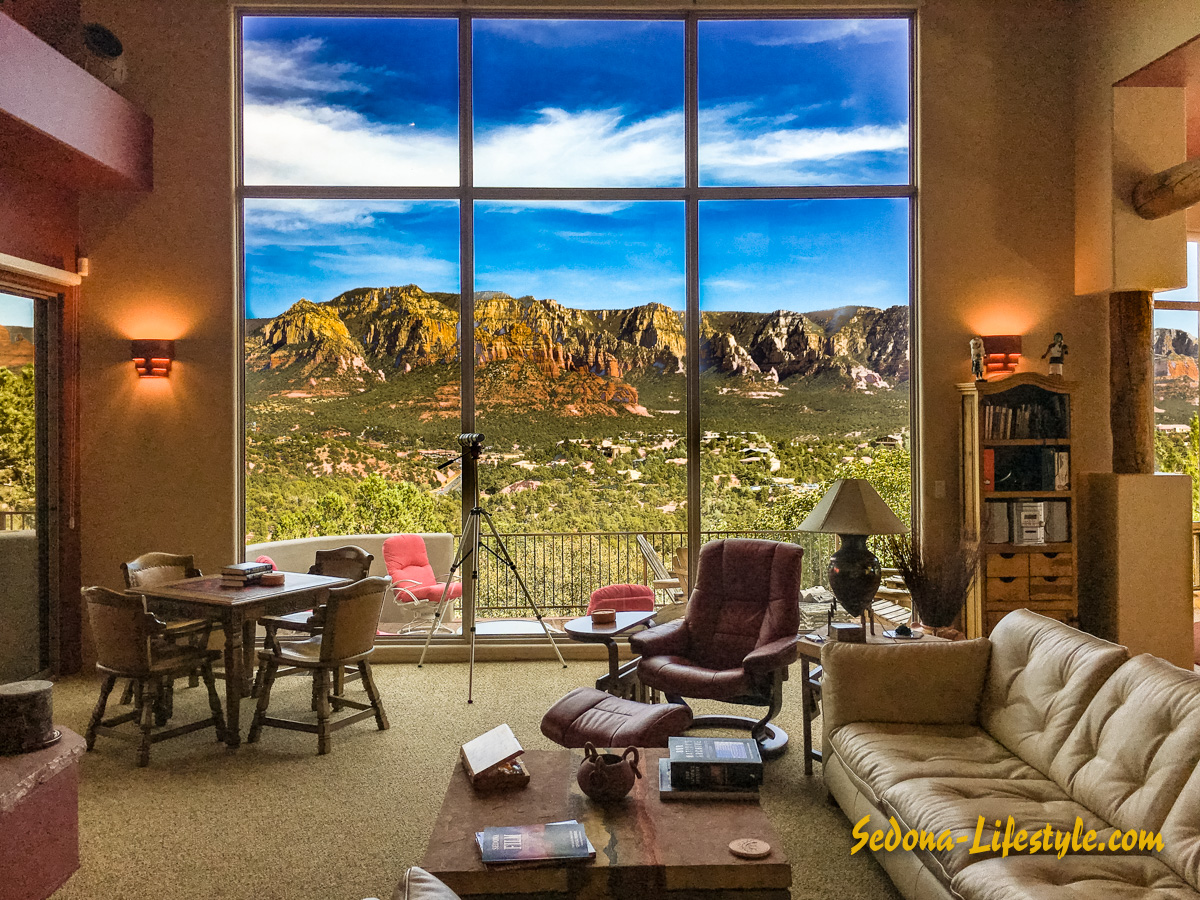 As a Coldwell Banker Sedona Arizona REALTOR®, my primary goal is to help my customers obtain their dreams, as well as satisfy their financial goals and objectives through real estate. From the moment I am contacted, you will observe my seasoned ability to provide you with “World Class Service” and that “Personal Touch” while utilizing a complete package of technology options that are of the utmost importance and so critical in today’s market.

I will tailor real solutions to fit your specific needs. – Sheri Sperry –

See Reasons Why Sheri Is Your Solution